Years ago when you went into a major retail store, a soft music played in the background.  Hidden in that soft music was a subliminal message that, without you knowing, told you that you needed to buy something.  It was so effective that the government passed a law that forbid its use.

This is a great example of the mind’s influence on what we choose to do and how we create our reality.  If you use Facebook, you will see something similar.  The technology that Facebook uses allows them to assess what you like to read about and sends you information that attracts you.  Unfortunately, with this information, there is usually something they are trying to sell.  When was the last “suggested post” that appeared on your Facebook page contrary to your preferences? 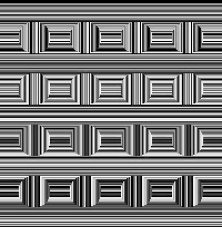 In the picture that I have attached to this blog, you see a compilation of blocks within blocks.  It asks you whether you can see any circles.  This is not a tool to judge your abilities or to point out that you have an inferior mind, but it is a great example of how our mind works to create our apparent reality.  Most of us look at this picture and fail to see the circles.  In time, some of us start to see them, while others see them immediately.  This is just a tool that reflects the mind’s conditioning.

The fact is that there are several circles in the image, but the reason that most are unable to see them is that the mind has been conditioned to see lines instead of circles.  Most of our surroundings consist of vertical and horizontal lines.  There are very few circles in our environment.  Your mind receives about 64,000 bits of information per second and can only process a small portion of it.  It must find a way to pick out the information that it seems important and leave the rest.  It does this by conditioning.  Since it is conditioned to see vertical and horizontal lines and not circles, it chooses only to bring out the lines into your apparent reality.

The problem arises when we believe that the reality the mind creates is actually real.  Even though the mind doesn’t choose for you to see the circles, in reality, they are there.

Because the mind is so important in our apparent reality, it behooves us to understand how it works, how it creates suffering and what we can do use it to help us instead of harming us.  The mind “cherry picks” the information that it delivers to us because of our beliefs, our perspectives and our conditioning.  Just like Facebook, it knows what you believe and prefer, so it is going to select only those thoughts that align with those beliefs.  It is a re-enforcement tool and each time you are re-enforced by the mind’s selection, you create your reality that re-enforces your beliefs.  Can you start to see the vicious cycle?  When was the last time that you tried to convince someone that strongly believed something that you were opposed to?  It is everywhere in today’s society.  You can no longer get someone to believe in your contrary beliefs than getting them to believe that the sun comes up in the west.  Their apparent reality will not allow them.

Now that we know how the mind works and how it influences the perpetuation of our perspectives and beliefs, we can use this information to discredit the illusory truth of the mind and create a life that sees the glass as half-full instead of half-empty.  How can we do this?

First, we have to understand that we can’t tell our mind that we have changed our mind.  It has spent too many years serving our belief system just to start telling it differently.  Even if we could convince the mind that we had new beliefs, the new beliefs are no more real than the old beliefs because the new beliefs are created by the same mind.  Example.  Have you spent much time with a “born-again Christian?”  I am not judging born-again Christians, they are wonderful people, but this is a good example of how a powerful change in beliefs can influence a person’s perceived reality.

Years ago, when I was in veterinary college, we watched the results of an experiment done on cows.  Each cow was deprived of specific trace minerals and vitamins.  Their individual deficiencies were recorded.  After a certain period, a trough was built that could hold these specific vitamins and minerals in isolated compartments.  One compartment might have selenium while another might have iron.  When the cows were released into the pasture containing the trough, amazingly, each cow went to the individual compartments that provided the essential nutrients that the cow was lacking.  While they readily consumed the supplement that they body needed, they ignored the others.  These cows had an unconscious awareness of their individual needs and were moved to select the correct compartment that would meet their needs.

How could a dumb cow do this?  They could do this because they were dumb.  If we define dumb as a lack of intelligence and if we define intelligence as cognition due to a developed forebrain (as humans have) then it is not hard to see that if we get the intellectual mind out of the way, we will intuitively know what is good for us.

I am not saying that the intellectual mind is not a good thing.  It is a great tool for balancing the check book or figuring out how to drive from Spokane to Denver, but it has no ability to give guidance.  And, guidance is what you need when it comes to what is truly best for you.  You have just been conditioned to turn to it when you are in need of guidance.

How do you tap into that guiding source of intuition?  By quieting the busy, intellectual mind.  The source of mind that guides us is in the background waiting to come forward at all times.  But, the busy mind keeps getting in the way.  It is like an annoying friend that won’t keep quiet.  As soon as we ignore the busy mind, it will eventually get quiet and then the intuitive mind will present itself.  Of course, there are many ways to quiet the busy mind from mediation to focusing on something that you love.

Once the intuitive mind whispers its guidance to you, you can then bring the intellectual mind back into your awareness and devise a plan.  This is called balanced-mind.  The intellectual mind is now in the place of serving you instead of you serving it.  Give it a try.  It might change your life and those around you.

Cats Don't Get Diarrhea
The Real In Reality